I originally created a website for Walt back in 2013. (A sample screenshot can be found below.) At the time, it was super-cool and modern, but as time went by, we decided that it needed to be refreshed and updated. This new version is significantly larger than the previous site. We have a blog, radio show feed from iTunes, two contact forms, nine mini-slideshows, and multiple testimonial carousels.

Walt’s main goal was to show an abundance of social proof to establish his credibility as a professional speaker, actor/performer, radio show host, and author. This was accomplished with the display of dozens of testimonials, a photo gallery showing him various rock stars, celebrities, and speakers, along with numerous improv & comedy photos, event & movie posters, and videos. Walt’s social media graphics were made to match his website, so his branding is consistent all across the board. 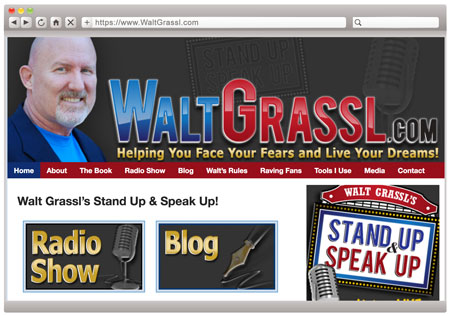 If you want to establish a professional, credible online presence,
I would LOVE to help you make that happen!